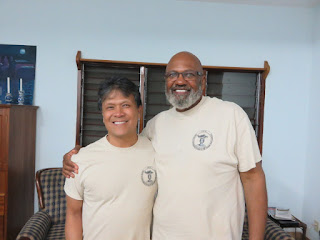 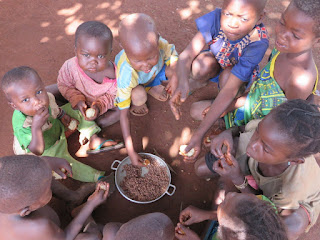 In mid-November, CEFA was visited by the new leaders of the Danforths' mission with the Evangelical Covenant Church; Al Tizon Executive Minister  and Josef Rasheed, Regional Coordinator for Africa. They saw a lot in just two days, touring the CEFA Center fields and gardens, seeing all the different animals (including the fish ponds), and interacting with most of the working staff; a visit to Kentzou to participate in Fulani evangelism; and checking out the various crops and fruit trees planted out at a near-by village co-operative. A highlight of their visit was while they were in that village, experiencing not just the harvesting of the high protein bean, the cowpea, which CEFA has introduced, but witnessing the co-op children eating them. The cowpea plays a key role in the fight against the rampant malnutrition in C.A.R. This was their first visit ever to see CEFA and its ministries in action and CEFA was blessed with their presence. 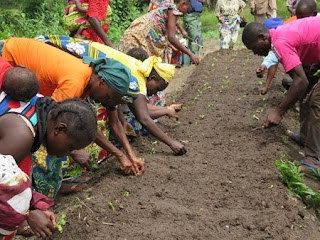 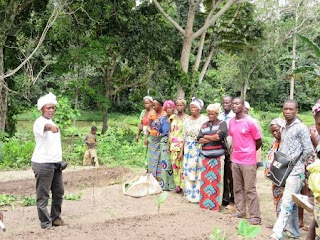 This last Saturday, Nadege, the woman's village co-op supervisor, led a seminar on why it is worth raising vegetables, especially now that dry season is approaching and other foodstuff from field crops will be less available. Nearby co-op members and moms with malnourished children at the hospital were invited and all learned not just the theoretical, but the practical by preparing beds and transplanting certain vegetables like lettuce and tomatoes. They also learned the special technique for planting tiny seeds like carrots. In the end, they were all challenged to put what they have learned, not only planting their own veggie gardens, but also helping other family members or neighbors to get their own plots going. Galatians 6:1-10 was shared where in particular, it talks about what we sow is what we reap – meaning in the spiritual realm, we need to be promoting peace and reconciliation (Jesus style) so that all can benefit from stability and security as times are once again heating up a bit here and it is not just from planting hot peppers!